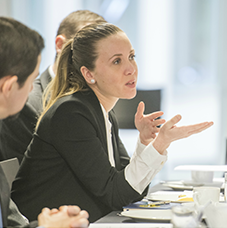 Michela Palladino is the Director, European Policy and Government Relations, at the Developers Alliance, the world’s leading advocate for software developers and the companies invested in their success. Michela runs the Alliance’s Brussels office and is responsible for bringing the voice of the developers’ community to the EU Institutions in order to support the industry’s continued growth, and promote innovation.

An Italian native, Michela has worked in EU Public Policy for almost 10 years. Before joining the Alliance in May 2017, Michela worked for six years at the GSMA, the trade association that represents the worldwide mobile communications industry. Prior to that she worked for the Italian Permanent Representation to the EU, the Italian Ministry for Foreign Affairs and the European Parliament.

Michela holds a Master’s degree in International Relations from the University of Bologna, Italy.